Recording audio is an expensive hobby. You need the recorder, you need microphones, you need a mixer, you need filters, you need a studio… Yeah, that’s what we still think from the good old analogue tape-days. Nowadays, things are a little easier, both on the gear and on the wallet. What remains to be purchased is at least a capable recorder.

I have the Zoom H2, as I have told before. I have no extra mics, as the H2 comes with 4 internal mics of excellent quality. The mic setup in this thing allows for narrow stereo, wide stereo and surround recording. This is thanks to the internal setup of the mics. The surround setting uses all four mics to record two separate stereo files that can be combined into a 4-channel wav file using software. If you have a 4 or 5.1 setup on your computer, the sound will immerse you into the surrounding when it was recorded.

Not all sound recorders will have all these possibilities, some even have more, most have less.

What all recorders suffer from, is wind.

No, they are not blowing in your face, it’s the wind outside that will most often ruin your recording. There are several solutions for this. When I recorded with a portable cassette player back in the 70s, the only way was to shield the microphone from the wind with your body. Since that was only a mono mic, that didn’t matter much. Today, we like to record in all kinds of environments, so some wind shielding becomes necessary.

Comes in the dead cat. No, I haven’t killed mine or any other for this. The dead cat or windshield is that hairy blob around the microphone. It looks somewhat like this: 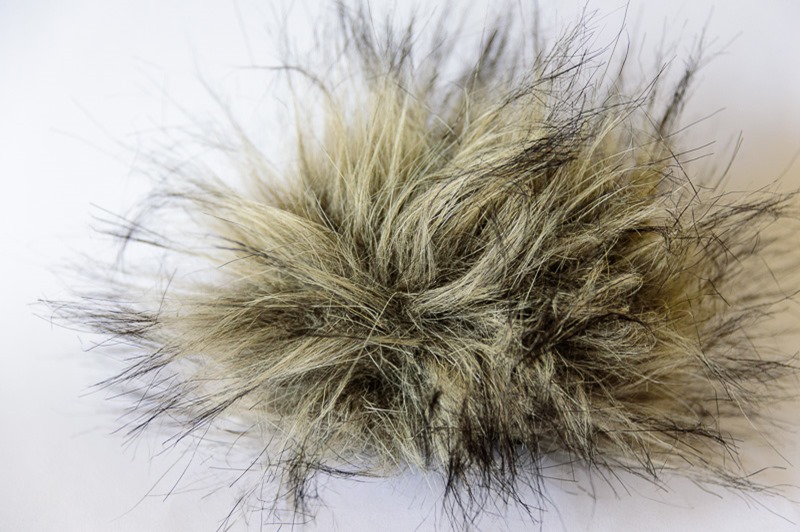 Colours will vary, I like the more natural-looking variants. Bright pink or orange tend to show too much to remain inconspicuous. This protection simply slips over the microphone and breaks the wind, leaving you with a decent recording. Unless you are dealing with gale-force winds. Then nothing will protect you and you’d probably be better off inside waiting for better weather. 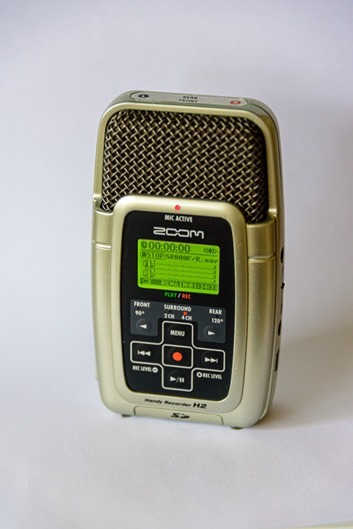 It looks like an old-fashioned microphone. The menu is kind of awkward and the buttons are sensi-touch buttons. If used properly and not abused, it will last a long time. Drop it and you are in for a new one. It records onto a simple SD card. A card you can take out and transfer to your computer. If you don’t like the idea of opening the somewhat flimsy trapdoor to the card, you can use the USB interface instead. 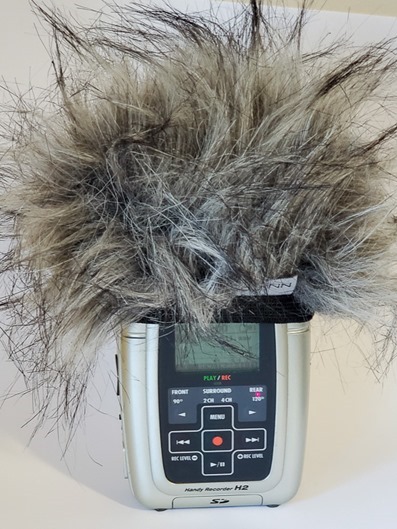 With the windshield attached, the device now looks like a rockstar with a bad hair day, or like Rod Stewart…

Is the dead cat effective? Listen to it for yourself. Here are two recordings, one with and one without the windshield.

The recordings were mere seconds apart and I chose not to record in a full-scale hurricane. That would be overkill. Also, I didn’t have a hurricane at hand this time. Perhaps later this year… What you can hear is that the second recording has this buffeting effect from a microphone being bombarded with pressure. A little like you get in your car when you open only one window on the highway.

And that wraps it up for the gear part. Apart from a tiny 20 dollar tripod that holds the unit upright when I’m not close to it, that’s about all the gear I use for now. Not a huge investment after all and lots of fun and learning to do.